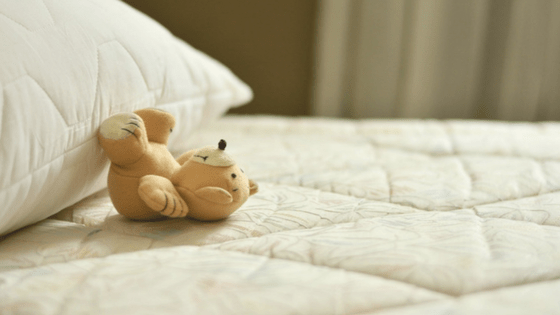 “Hey girls, time to brush your teeth and go to bed!”

The girls start complainig, just like every night.  Mom is very tired, she can’t wait for her daughters to be asleep. But there’s still a long way to go: the bathroom, the story, the lullabies, the good nights kisses… Mom believes that Alma and Luz may be a little too old to still be singing them lullabies, but she finds it hard to remove certain rituals even though they are quite grown up. It’s been many years, eight since Alma was born, and six since Luz. Mom still sings to them as if they were babies, the same six songs every night, although altering the order from time to time, so that they don’t get bored. But they never complain, so the ritual continues, probably until they decide for themselves.

After the brushing, the peeing, the giggling, the last hurried pats to the cat, the searching for the book to read, and the endless process of picking the clothes for tomorrow, the girls finally climb into bed.

“Well”, says Mom opening the book, “let’s go with If you see a foam hill”.

–”Mom”, says Alma, “Shall we chat today instead of reading?”

Every now and then the girls decide to put Mom in a tight spot with their questions and confessions.

“What do you want to talk about?”

”No, I’m going first”,  interrupts Luz. She loves to disagree with her sister.

“Come on then, say something”, urges Alma.

“Well, I don’t want to go to school, I want to stay home with you”.

Here we go again, Mom sighs. This topic is already a classic in Luz’s repertoire.

”I know sweetie pie”, says Mom. “But I can’t take care of you right now, nor be your teacher”.

“Why not”, Luz whines. “You always say there are children who don’t go to school and learn at home”.

“Yes that’s right”, says Mom. “But I have to work, and I can’t stay at home with you. Besides, your sister does go school, and you get bored to death without her, don’t you? Maybe someday we’ll organize a school at home, but right now it’s not possible”.

“Okeeeey”, says Luz not the least bit convinced. “But do it soon, because I don’t like going to school, and I hate the writing sheets”.

Mom sighs once again. Yet one more pending matter.

Oh dear, thinks Mom. It’s way too late for this.

“Well” she answers. “For Catholics, a sin means not complying with the rules of their own religion”.

“So, are we Catholics?” asks Alma.

“But,” Alma insists. “What exactly is to be Catholic?

Oh my, Mom is already sweating. She deems herself a very bad explainer.

“Let’s see,” she says. “Do you remember what we talked about all the different religions? Well, Catholic is one of them. Each religion has its own rites and rules, and people who follow that religion have to also follow those rules. And, according to Catholic religion, if you don’t follow its rules you are committing sin”.

“And what are the Catholic rules?” asks Alma.

“Well they have many, such as to not kill, steal, lie… And also many other rules, such as to be married forever and never separating, to not have sex before getting married… Therefore, for example, using contraceptives is not allowed, nor same-sex couples.

“I knew it!” Alma shouts triumphantly. “Granpa and Granma are Catholic, even though Dad, being their son, is not”.

“And how do you know that?” asks Luz yawning. It’s quite late by now, and such depth makes her sleepy.

“Well,” says Alma. “I know it from two things. Firstly, when I told Grandma that you and Mar are dating, she got very angry and said that it was impossible, that two women couldn’t be dating”.

“You told Grandma?” Mom asks open-mouthed but trying to speak in a neutral tone.

“Of course, she’s my grandmother,” answers Alma naturally. “But I won’t mention it again, she got really upset”.

Mom sighs again, trying not to let her sadness show too much. No wonder Grandma never calls anymore to speak to the girls. She always waits for them to be at their father’s. Mom understands, but lately she has to make efforts to understand too many things, and sometimes she feels overwhelmed. She looks at her daughter, and manages to summon up a smile.

“And from what else you know that Grandma and Grandpa are Catholics?”

“I say it!” cries Alma even louder.

“Look,” says Luz very quickly, lest someone interrupt her. “Grandma and Grandpa are Catholics because they are always fighting but they never split up, they are a pain”.

Mom can’t help but laughing out loud. She loves the logic of her princesses.

“Grandpa is really cheeky because he’s always reading the newspaper or watching football, and Grandma has to do everything at home”.

“True,” says Luz angrily. “Grandpa never helps with anything, nothing!”

“Well, you could talk to him,” Mama suggests, “and tell him to help her”.

“That’s exactly what we’re going to do!”. Alma gets excited. “We’ll tell him not to be so cheeky”.

“Well,” says Mama. “The thing is that Grandma and Grandpa are old now, and it’s very difficult for them to change their habits. But you can try!”.

“Well, Grandpa of course” says Alma confidently, “because he is older”.

“Not necessarily,” says Mama, “that’s not how dying works”.

“How does it work then?”, they both ask at once.

“No one knows who’s going to die first, or when. Old people die, yes, but young people die too, even children.

“Really!!” They both have a hard time taking in what Mom is saying. Alma sits up straight and looks at Mom with wide-open eyes. In the meantime, Luz has huddled up under the blankets, and starts to cry.

“What’s the matter baby?” Mom grabs her hands and kisses them gently.

“But Mom,” says a very worried Alma, “how does people die?

“Well people die in many different ways”, says Mama. “But basically the heart stops, you stop breathing and….”

“…and you fall asleep” Luz finishes the sentence in tears.

“No my baby”, says Mom softly. “Asleep is not dead. When you fall asleep you wake up later on. When you die you don’t wake up anymore”.

“Ever,” says Mom. “The body stops working and shuts down”.

“Then,” continues Alma very softly, “if your heart stopped right now, would you die?”

“And if Daddy dies too, who are we going to live with, me and Luz?

Alma has always been a very practical child.

“Well” says Mama, “we would find a solution. You could go and live with Grandma, or with Aunt Sophie, or with Uncle Peter… Everyone would want to take care of you”.

“I don’t want your heart to stop,”  weeps Luz softly.

“I don’t want it either my love. But that cannot be foreseen. Don’t worry, I will try to be with you as long as possible”.

“Great!” says Alma smiling, “and then we all die together holding hands, you hold us tight, okay?”

Mom smiles, although she feels very confused inside, as well as sad. She doesn’t want to lie, but neither she wants to worry her little ones too much. She doesn’t know what it would be best to say.

Mom bends down on Luz’s bed, who is still huddled up in the same position. She tucks her in and gives her a very tight kiss.

“So am I sweetie pie”, answers Mom.

“Moms are scared too?” asks Luz.

“I very often am. But when I’m afraid, I close my eyes and I see the two of you smiling, and  it makes me feel much better.

Luz smiles, her eyes already closed. “You love us very much, don’t you?”

“I do. I love you very much. Good night, precious”.

Mom kisses her once more and gets up. At the door, she looks back at her daughters again.

No sounds except for the cat’s purring and the girls’ heavy breathing. She smiles, and sighs so hard that her lungs almost deflate. She turns off the light in the hallway and leaves the room.

Mar is already in bed, and Lucia sits next to her.

“Why does it all have to be so hard for them?” asks Lucia.

“It’s hard for everyone”.

“I know,” says Lucia, “but they’re still so little!

“Well, at least they have someone to talk to,” says Mar. “Very often parents skirt issues when their children ask them difficult questions, but you answer them honestly”.

“Well, it’s no wonder people skirt stuff,” sighs Lucia. “It hurts so much”.

She lies down and huddles up in Mar’s arms.

“I think,” she says, “I’ll take out another book from the library tomorrow, one they love and takes us five or six days to read.

Mar turns off the light. The reflection of the moon enters through the window, and everything is silent. “Well, I don’t want you to die either,” she says softly.

“I’ll see what I can do,” replied Lucia half asleep. “Tomorrow I’ll ask for an appointment to speak to God.

“I’ll tell him I don’t want to die until the girls are older”.

“You don’t believe there’s that kind of god you ask things to,” says Mar, “so he won’t listen to you”.

“He won’t listen to you either, even if you do believe”, replied Lucia. “I’ll die when my time comes. And so will you, and them. I’m tired, let’s go to sleep”.

We recommend our Open Heart Program

This is an necessary category.